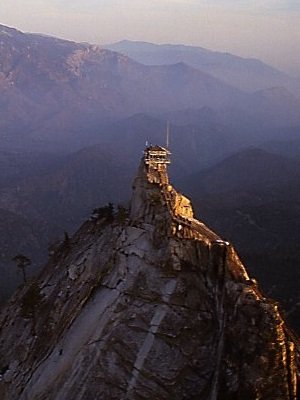 Today, visitors can still hike the trail to the large granite domes where the Needles Tower once stood. Rock climbing is a popular activity near this location.

The Needles Fire Lookout Tower, was located on the Western Divide Ranger District within the Giant Sequoia National Monument on the Sequoia National Forest. The lookout was destroyed in a structure fire, July 28, 2011.

The lookout tower was constructed in 1937-38 by the Civilian Conservation Corps atop the rock formation at 8,245 feet. A Forest Service employee, stationed in the tower, was responsible for detecting fires and relaying radio messages to a dispatcher, who in turn sent firefighters and support equipment to extinguish the reported fire. The tower was utilized an office as well as the staff home for the summer months while the lookout was on duty.

The lookout was a 14x14 foot wooden C-3 style cab with windows, siding, roof and tower. The cab had over-head shutter supports which became standard on C-3 and L-4 cabs in 1936. Access to the cab was along stairways and walkways that were suspended from the granite or across granite outcrops.

According to Mark Swift, archaeologist who nominated The Needles to the National Historic Lookout Register, The Needles was "one of the most fantastic lookout locations in California rivaled by Buck Rock on the North end of the Forest".

Development of Region 5 lookout styles as a final form of the standard 14x14 wooden live-in cabs.

Following the mid-1950's a variety of steel wall cabs became the primary lookouts built in California.

Needles overlooked the Kern River Drainage, Mt. Whitney, Olancha Peak, Farewell Gap, and Dome Rock. The tower was the primary communication line for persons in the backcountry where cell phones do not work. The Needles Lookout Tower was one of the most popular places to visit on the Western Divide Ranger District.

For more information, check out the Buck Rock Foundation website at buckrock.org/index.html