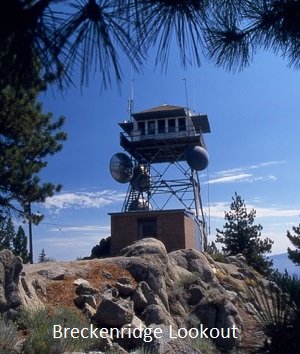 The original Breckenridge lookout was a "crow’s nest" lookout built in the top of an 87 foot tall tree in 1912. This tree still stands near where the current lookout is situated. In 1931 a wooden lookout tower was built near the tree, but not in the same position as the current lookout structure.

The 1931 tower was replaced in 1942 by the structure that stands today. It was built by the Civilian Conservation Corps (CCC) and is on the National Historic Lookout Register. During World War II Breckenridge Lookout was used by the Aircraft Warning Service to watch for enemy aircraft.

The flora consists of typical Sierra mixed conifer species including Ponderosa and Sugar Pine, white fir, with an understory of black oak, manzanita, and chinquapin.

Breckenridge is one of California's 50 finest peaks, #35 in fact, with a prominence of 3,271'[PAD1] above the surrounding landscape.

For more information, check out the Buck Rock Foundation website at www.buckrock.org/index.html