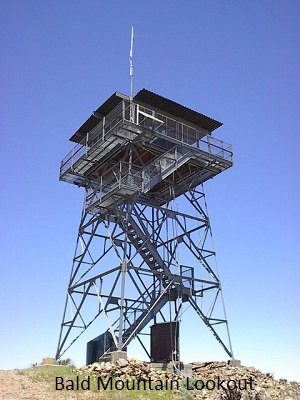 Bald Mountain Lookout first became active in 1951. The lookout used today was constructed in 1955 from materials brought in via a mule train along trails before any roads existed to the area.

Bald Mountain Lookout is located at an elevation of 9,430 feet off the Sherman Pass Road near Black Rock Station in the Southeastern most portion of the Sequoia National Forest, Kern River Ranger District. It is also used for BLM and Inyo Forest Fire traffic.

There is not a lot of history for Bald Mountain and the actual date when the tower was first used for fire detection is unknown because there were two towers located in the area, both of which, were called Bald Mountain Lookout.

The lookout structure is a tall metal tower with a single room cabin surrounded by a catwalk. It consists of a CL-100 live-in style cab with a flat, low roof sitting on a metal tower.

Information about the lookout first appeared in 1935 on the Inyo National Forest map at a different location, but it was abandoned when a lookout at Sherman Peak was built in 1936. The site saw use again in 1951 and the current structure was constructed in 1955. The lookout became accessible to the public in 1967 when loggers first built roads through the plateau in order to harvest its valuable timber.

Currently, the lookout is staffed full-time during fire season and generally open to the public.

Bald Mountain is surrounded by the Bald Mountain Botanical Area that has one of the most spectacular vistas in the Sequoia National Forest. It is a unique 446-acre botanical and geological island in the southern Sierra on the Kern Plateau.

The fire lookout tower is located central to the botanical area. Standing on the tower’s catwalk, you can view over 1000 square miles of the Southern Sierra's.

From Sherman Pass road (22S05) take the Bald Mountain Lookout road (22S77) and follow until you reach the tower.